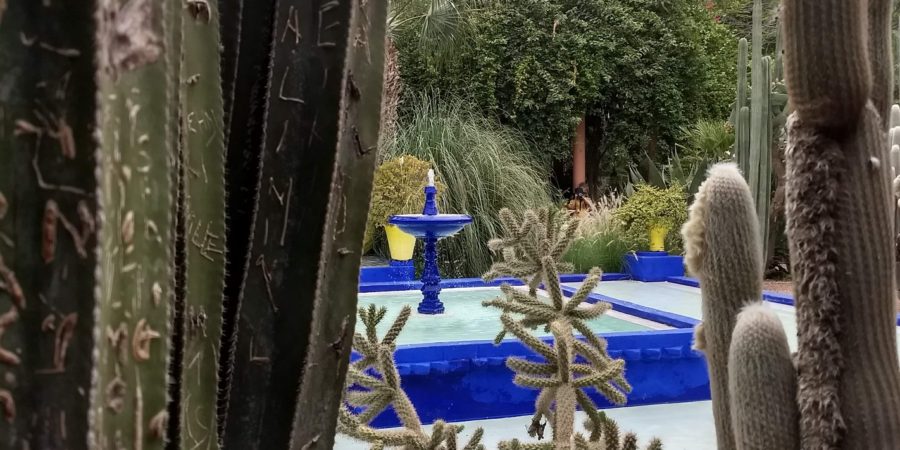 In the last years I have worked for an association in german-french-moroccan holiday camps for teens. This year as well. But this year was special because it was the first time we went to Morocco.

My travel began on a Sunday. Our voyage was supposed to start on Wednesday but from Berlin and so I decided to go there a few days in advance and visit some family. It was a pleasure to meet my grandparents and my cousin and to enjoy the city. I went to the botanical garden and to a beautiful market hall in Kreuzberg.

And then it was already Wednesday. Our train was really early and so everyone was still tired as we met at the main station. In the afternoon we flew to Marrakesh.

In Marrakesh it was hot for us and a bit foreign. Palms everywhere (I like!) and we met the french people there. The first stop was our apartment. And of course the swimming pool. A really nice refreshment after the long travel. In the evening we went out for dinner to the Djemaa el-Fna and made a little tour through the Medina. It was crowded but nice and the food was delicious.

The next day we went to the Jardin Majorelle – in Germany we would say it is a botanical garden. And what a beautiful one! Okay, to be honest: I love palm trees but in Germany you have to grow them in greenhouses and so it was a pleasure for me to see them outside. And the famous bleu majorelle is nice too. The berber museum was interesting as well because they show the different clothings, the jewellery and carpets. So much history in such a small space!

After having lunch (which was sooo good by the way) we went to the Medina for some shopping. As we were quite a lot of people we split into two groups and walked through the narrow alleys and couldn’t get enough of the different shops and the multifarious range of products.

In the evening we had dinner at the apartment and got to know each other a little bit better with parlour games.

The next day we started our trip to the desert but more about that next week!